Caliph Abu Bakr al-Baghdadi’s caliphate is a brutal, terrorist state that is slaughtering an unknown amount of people (including Muslims) and are persecuting Christians (Mosul being one example) among other groups.  The Islamic State has carved out a huge amount of land from Iraq and Syria, and they are pushing further.  Within their territory they have implemented Sharia Islamic law and are butchering an unknown number of people.

Islam gained power and territory by the sword from its very beginning.  “The main focus of Muhammad’s later years was increasing the number of allies as well as the amount of territory under Muslim control… Major battles in the history of Islam arose between the Meccans and the Muslims; one of the most important to the latter was the Battle of Badr in 624 AD.  Other early battles included battles in Uhud (625), Khandaq (627), Mecca (630) and Hunayn (630).” (Wiki articles here and here)

Muslim aggression conquered all of the Middle East, North Africa, Spain, Turkey, Macedonia, and other areas.  Wherever they went they persecuted Christians, stole their land, stole their church buildings, and even stole their architecture.  Hagia Sophia (The Church of Holy Wisdom) in Istanbul Turkey is just one example that was taken by Muslim invaders May 29, 1453.

The wars against Islam by the Europeans was a political response to hundreds of years of Islamic invasion and war.   While I deplore the acts of barbarism that occurred during the Crusades (the atrocities by the European armies was in no way Christian), the Crusades were necessary.  And the Crusades is the reason that Europe was not completely overrun by Islamic aggression.  Article here.

The west has been fighting against Islamic aggression for over 1,300 years.  Make no mistake, their purpose is to conquer the Earth and force everyone to submit to their religion.  Jews and Christians are considered second class citizens who are forced to pay a tax if we don’t convert, or they will ethnically cleanse the People of the Book (as they did in Mosul), or they will kill us.  Atheists and everyone else will be forced to convert to Islam or die.

There are an estimated 1.2 billion Muslims in the world.  Brigitte Gabriel estimates that 15-25% of Muslims are radical jihadists.  That is 180-300 million violence radicals.  While the majority probably wouldn’t embrace the violence, there are many who approve of the violence.  Especially in regard to Israel.  The majority doesn’t seem to be inclined to come out and condemn the violent Muslims with a powerful, united voice.  Why not?  Violent jihad is taught in the Koran.

I am sickened by the acts of the Islamic State, and I am even more sick because while the world attacks and condemns Israel for defending herself against violent Muslim terrorists, no one in power (media, presidents, prime ministers etc etc) is saying anything about the Christians and other groups being murdered and crucified by IS.  The war with Islam will never be over as long as there are people who believe in jihad and the subjugation of the world by Islam. 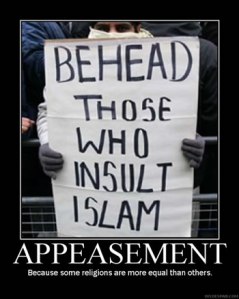 Don’t ever forget the Muslim Jesus is not the Jesus of the New Testament.  They deny that the Apostles were prophets, and they claim that the Bible is corrupted from Genesis to Revelation.  Islam is the enemy of Judaism and Christianity.

Many people of the west seem to have forgotten history, or are so blinded by political correctness they can no longer see the truth.  The violent protests in western nations by Muslims against Israel and those who support her are a reminder.

Islam is tyrannical and the foe of any liberty loving individual.