The Assembly of a New World Order 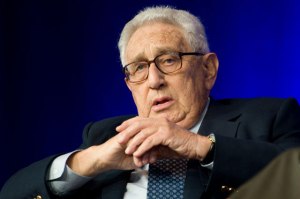 “A world order of states affirming individual dignity and participatory governance, and cooperating internationally in accordance with agreed-upon rules, can be our hope and should be our inspiration.” – Henry Kissinger  August 29, 2014 (Article here)

“—Dr. Kissinger served as national security adviser and secretary of state under Presidents Nixon and Ford. Adapted from his book World Order, to be published Sept. 9 by the Penguin Press.”

Not to mention he is involved in all the big power groups in the world like Bilderberg etc.  I found this article very interesting because he points out that we now have a global economy, and we are all interdependent on one another.  But, we do not have global governance.

It points to a world government coming into power at some point.  Why is this important?  We know that it will be led by Antichrist and his 10 member council (Daniel 2:31-45, 7:24; Revelation 17:12).  It points us to the soon return of Christ.

The taking over of the world by Antichrist won’t eventually happen by chance… the Antichrist is a judgment against the world for rejecting Jesus and loving their sin.  He will be released at the breaking of the first seal and conquer the world (Revelation 6:1-2).  Authority will be given to him over every tribe, tongue, and nation (Revelation 13:7b).