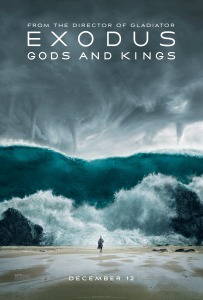 Let me start off by saying that if you believe the Bible and think movies made about it should be true to the text, don’t bother wasting your money on this piece of non-Biblical garbage.  Yes, I saw it today so I could review it.  I call it garbage because the film makers ignored 90% of the Bible and made up whatever they wanted.

I truly do not understand why film makers waste their money and time making a “Biblical” film, but completely alienate the faith audience by butchering everything about the story in the Biblical text (not to mention Christian Bale’s comments).  I did not have high hopes, and I was not surprised by the failure of this production.

Like the Noah fiasco, the film was beautiful from a cinematography stand point, but that is about the only positive thing I have to say about it.

The problem with these film studios is they really don’t understand that if they actually made a film about the Bible true to the text, they would make huge amounts of money.  Instead they make a film that will lose money because of their stiff necked, illiterate, inability to understand the faith community when making a movie position.

The Sony hack truly has revealed the ugly side of Hollywood and the film industry.  We shouldn’t give them any of our money.