I thought I’d post about an event that happened to me in November 1991. Mainly because I think it is interesting. I’ve been watching a lot of episodes from UFO Hunters on the History channel, and since I had an encounter, I thought it would be good to get it out there. I’d actually like to do some further research into it in an attempt to locate other witnesses and figure out what it was I saw.

I am a skeptic about alien space craft and what not visiting the Earth, but I will not discount the possibility. Anything is possible after all, and I have my opinions about it. I think its very probable as anything else that these strange craft people see are actually government controlled. Or they may be aliens or something else. We will only know when they land and say “hi.”

I was 16 years old at the time, and it was sometime in November. I don’t remember the exact day. I decided to go get a hair cut. So I borrowed my Mom’s car and headed out. It was between 7-8 in the evening. It was dark too. The first thing I noticed as I was driving along was the unusual amount of lights in the sky. There were a number of planes or helicopters all over, but not close enough for me to hear or identify them.  We do have Hobby Airport in the area so its not uncommon to see planes and what not, but there were more than usual.

As I traveled west on Sycamore in Pasadena, TX, I came to T interesection and stop sign at Beltway 8. I believe its called E Sam Houston Parkway now. Back then it was not a toll road. I looked to my left and saw the traffic was stopped down at the Spencer Hwy intersection. I turned right and headed north. Almost immediately I looked over to my left and saw something that grabbed my attention.

About a hundred yards across Beltway 8 from my location (I measured it on Google Earth) there is a field with 2 bill boards on the north and south side. Hovering above the field was a large black shape. It was between the bill boards. It had no lights on it. I slowed down to almost a complete stop, turned off the radio, and rolled down the window. There was no sound coming from the object.

I should have stopped the car and gotten out so I could get a really good look, but I was so surprised I didn’t really think about it. Within 10 seconds from me sighting the “craft” it began to slowly ascend into the sky. It very large, but I could not see any detail because it was blacked out. I am not sure if it was a “saucer” shape or not since I was looking at it from the side. But it was not very thick.

I circled around at the U-Turn on Pine as it slowly moved upward. When I was under it on the opposite side from where I started I could tell it was quite wide. I would say it was circular underneath, but not perfectly.  I circled around back at Spencer and watched it float high and higher, and I ended up at a light down by Pasadena Blvd/Red Bluff intersections. At some point the dark shape turned on its light or lit up into a ball of light. I’m not sure how else to describe it.

I was dumbfounded. Anytime I have told this story too, no one believes me. I’ve been laughed at quite a bit about it. But, I know I saw this.

Here are a number of links and pics of the location I made on Google Earth. 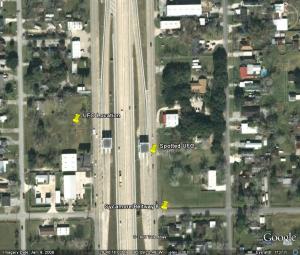 Close in view of scene with markers. 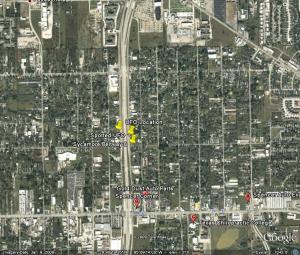 A bit higher elevation with markers.

I think it is important to point out that the toll booths and toll road had not been built in 1991. The last shot (Ground View #5) is from the road behind the field at around 2722 Morning Glory. You can see the Bill Boards through the trees.

After thinking about this incident for 17 years, I’ve made some observations about it.

1) I’ve been within a hundred yards of a military Cobra helicopter. That was extremely loud when it approached, landed, took off, and left the area. This object that I saw did not make any sound what so ever. I was around a hundred yards away when I first saw it. When I circled around and was under it, I did not hear anything. If you go slightly north and south on Morning Glory, there are houses there and across the street. If this craft was making noise, why wasn’t there a crowd of people out looking to see what it was.

2) It must have been intelligently controlled from the observed behavior.

3) I think it is possible that all the other craft in the sky were looking for this object. There were probably radar records kept somewhere that has a record of the air traffic on that night. It happened during the week as it was a school night. The UFO may have been very low to the ground and between the bill boards to protect itself from detection by radar.

4) It began moving upward shortly after I noticed it. I’m wondering if the pilots noticed my car.

5) Human aircraft can’t move so fast they leave a light trail from a dead stop, nor can they do a 180 degree u-turn at the same speed.

6) I think it is interesting the UFO was hovering above an empty field.

7) It is amazing something like this would happen in the middle of a suburb in such a populated area.

8) There was zero information on the news about any of this.

9) The fact that this craft was blacked out, hovering that low, had bill boards to its north and south sides, over an empty field, says something. It appeared to be hiding for some reason and didn’t exhibit normal human pilot behavior.

I’d like to find out more information about this event. It would be great to question those home owners in the immediate area from both sides of the road. I’d like to investigate this too with the airports and other military bases in the area.

I thought I’d add some more graphics based on what I saw.  The black ovals are just estimates of the size of the UFO I saw in November 1991 in Pasadena Texas. 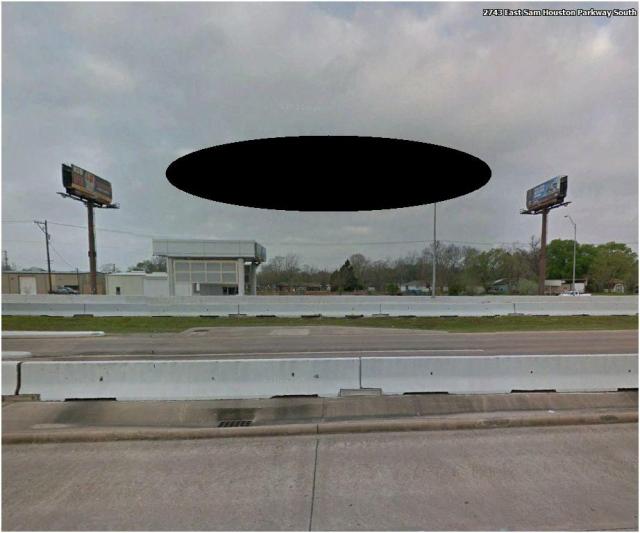 A rough size estimate of the UFO when I first saw it. 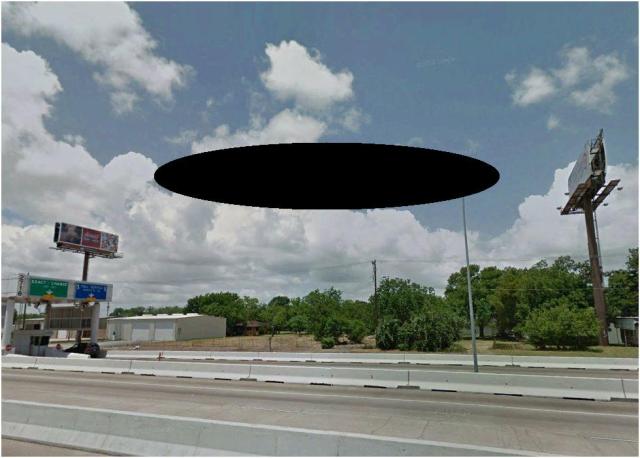 A rough size of the UFO as it hovered above the field in complete silence. 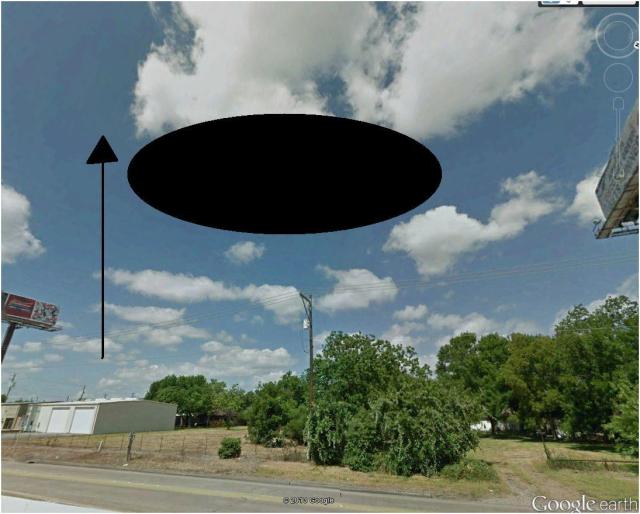 When I circled around at Pine and was nearly underneath it was circular (but not perfect). It had already started to ascend upward into the sky, so it wasn’t quite as large since it was moving up.. 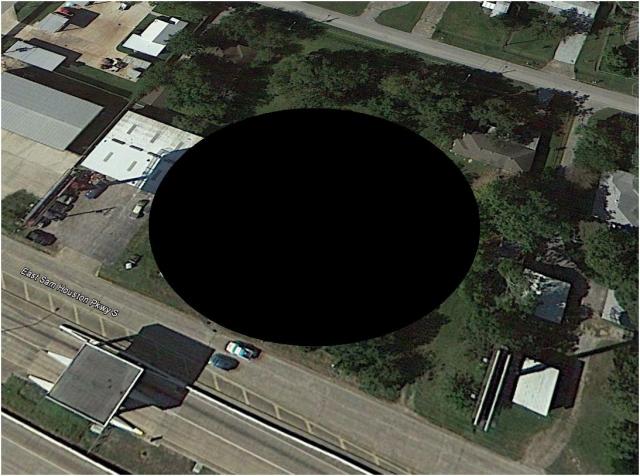 This is a rough size estimate looking down at the UFO as it hovered close to the ground between the two bill boards. 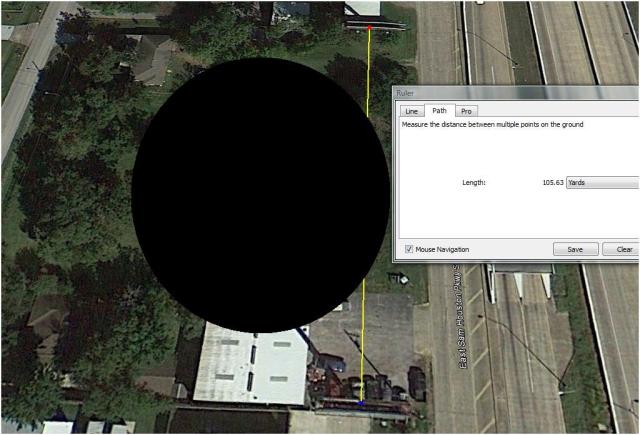 A measurement from North to South between the two bill boards. One on the north end of the property and one on the south. Around 105 yards.

A measurement of the property from east to west. Around 95 yards. Again this is a simple rough estimate of the size of the UFO. It is not exact.

This is the path I took in my car. I took a right on Beltway 8 (Sam Houston Parkway) from Sycamore. Took the U-Turn at Pine, went underneath the UFO, took the U-Turn at Spencer and headed back north.

www.danielsilas.com
View all posts by Daniel Silas →
This entry was posted in UFO, Ufology and tagged November 1991, Pasadena, Texas, UFO. Bookmark the permalink.