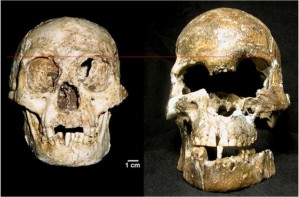 “Nearly a decade ago, researchers discovered the remains of what was thought to be a new human species and dubbed the ‘Hobbit’ human for its short stature and small skull.

While the 2004 discovery on the Indonesian island Flores was hailed as ‘the most important find in human evolution for 100 years’ at the time, more recent analysis debunks that Homo florensiensis was a distinct human species. A team of international researchers now think the 15,000-year-old bones represent someone who had Down syndrome.”

A lot of the “distinct species” or transitional forms for human evolution are either frauds or misidentified.  This is a perfect example.  This “distinct species” discovery has been around for 10 years now and lauded around by scientists.  I think a lot of the others are just as bogus as this one and can be contributed to disease, genetic disorders, age (brow ridge), birth defects, and deformities.

Sorry folks, hobbits are only a fairy tale created by an imaginative human…  as is the idea of macroevolution.

I’m really pleased with the scientists who brought this new data forward.  I’m sure it will probably cost them something when the rabid evolutionists see another one of their frauds shattered.