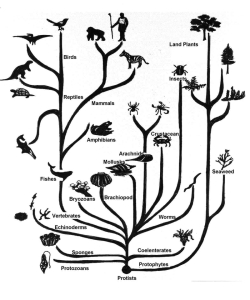 The answer is simple.  No!

In my opinion Christians should not embrace Evolution.

Evolution is completely opposed to Biblical Judaism and Christianity because death did not enter into the world until after Adam and Eve sinned. The animals were created before that and did not evolve into what we know as an elephant, lion, or dog etc from a single ancestor.  They were created separately by God.

For evolution to work you have to have death and corruption of genetics to get the mutations for biological creatures to “evolve” over long… long… long… long periods of time. Then you have the problem of huge, astronomical chances to get one beneficial mutation out of probably millions of mutations that would kill the animal.

Sadly the current Pope seems to have embraced some of the broken paradigm of Evolution.  Article here.  A decision to heap up into their pile of bad theology and doctrine and justifies us to continue our 497 year protest! (Happy Reformation Day!)

8 Responses to Should Christians Embrace Evolution?